On Monday, April 1 Daniel Butler, Mayor of the Metropolitan District of Limerick held a Mayoral Reception at City Hall to honour three inspiring and driven Limerick women, specifically for the work they do regarding mental health.

Daniel told ilovelimerick why he chose Emma Langford, Dr Jennifer McMahon and Sr Helen Culhane, ‘It is about honouring three women who are doing something special in Limerick. What combines them all is their connection to mental health advocacy and in a practical way, also music as well combines all three of them.’

Singer-songwriter Emma Langford lingers in that liminal space between folk, jazz and traditional Irish nuance. Valerie Dolan, owner of Dolans Warehouse, Limerick spoke kind words about Emma at the reception saying ‘She has given so much, she has worked harder than any musician in this city, she has given more of herself, more for women, more for charities. It is great to be able to know Emma because she is one of the success stories.’

Emma Langford said ‘When you grow up in the city it means a lot when your mayor recognises the work you’re doing and your friends and your family get to be there and be part of it so it is really special.’ In October 2017, her debut album Quiet Giant, described by The Irish Times as “an enduring piece of work”, was released. She is currently touring the world while working on a second album which she hopes to release by the end of the year.

Dr Jennifer McMahon plays many important roles within the city. She is the chairperson of Limerick Mental Health Association, a singer-songwriter, a published researcher and a lecturer in Educational Psychology & Inclusive Education at the University of Limerick. Jennifer said ‘It is an absolute privilege to be recognised by your own city for the work that you do, so I am hugely honoured.’ Limerick Mental Health Association (LMHA) was set up by a group of community leaders in 2002. LMHA promotes positive mental health across Limerick City and County. Jennifer is extremely proud of how far they have come as a group saying ‘We have really grown as a board it is a fantastic organisation with a great team of people there’.

Mayor Daniel Butler said ‘What they are doing just beyond mental health is they are making Limerick society that bit better through volunteerism, through work, through their music, through their art form, so I am hugely grateful for them and the opportunity to honour them is a great honour for me’. 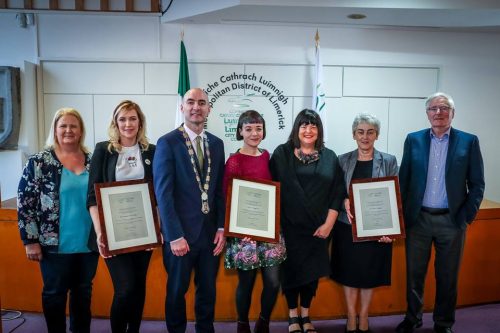